Slice of Work #11 — 'Show up': A Priceless Lesson in Motivation

It was a cold winter morning of 26th Jan, very many years ago in Gomia, a small town in Bihar. He had woken up at 4.30 and was at the factory grounds, all excited to participate in the mini Marathon in a difficult terrain of undulating lands, finishing at the factory gates. He was the only Management Trainee ( MT) at the event. For over 20 years, there has been only one winner – Viktor Lakra, a seasoned runner, a well- built local chap. The MT was all scrawny and a kid by comparison to Lakra. 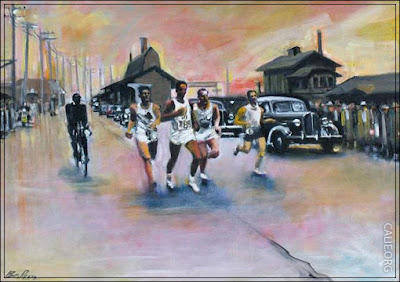 The race started with over 50 runners.The roads were rough,the climb tortuous, the downs, pleasant. Lakra was pounding the gravel in a rhythmic fashion. There was no way anyone could over-take this guy. He kept at it and make sure that no one was anywhere near him. And then came the climb, one of the steepest, the one where you just want to give up and just hobble. Not Lakra, he was lapping it up. And the trainee was exhausted and almost giving up.

Just then he heard a booming voice, a voice that used some choicest unprintable words, goading him into action. This man on a scooter at 5.30 am driving alongside, coaxing him to run and not give up. He did not care about the winter morning or the fact that the MT was not even in his department. All he wanted was for him to persist. The words helped. The MT started to run fiercely, his strides were getting better. Daljit Singh who had no business to be up that early in the morning, provided the much needed words of encouragement, and to a Management Trainee he cared for.

It was the home run, and just some 50 meters. Lakra was ahead and the MT was tiring, and Daljit was screaming. The MT put some real zing into the final kick and ran like never before, and past Lakra in the final 10 mts and into the ribbon and collapsed in a heap. All worn out and tired with the sweet sweat of success streaming down his face. Lakra patted him on his head and vanished. Daljit came up and instead of shaking the MT's hand, gave an affectionate slap. His brimming smile, mustachioed face and twinkling eyes said it all - the MT had won.

What mattered was that someone showed up. What does it take for someone to goad another in their hour of need? What motivated them to do this for another in a selfless way? 'Puttar, just make sure that you show up and cheer others and help them find their zone, and you will find yours' he one said. Motivation is more about giving than receiving. A selfless act that can be only returned by paying it forward. That race is still etched in my memory, for I was that Management Trainee. And of Daljit Singh, a man who taught me the foundation of motivation - to show up, coax and cheer.
Posted by SV Nathan at 7:00 AM